Thai tea is a popular traditional tea originating from Asia, consumed especially amongst the people of Thailand. Thai tea is widely consumed because of its delicious taste.

Thai tea can be served hot or cold and one could further add milk, sugar, or a variety of tea to it. The major tea blend used for preparing Thai tea is often of the Ceylon variety.

Furthermore, Thai tea contains caffeine; about 50mg-60mg per 8-ounce cup of this beverage. This is equivalent to about half the quantity of caffeine in a typical cup of coffee.

Thai tea is rich in antioxidants as well as in vitamins and minerals such as vitamin A, vitamin C, and calcium. However, moderation could be suggested in consuming this tea as a glass of Thai tea could contain as much as 180-300 calories although most of the calories are due to its sugar and milk constituents. The tea itself has minimal calorie.

Below are various benefits of Thai tea;

The composition of Thai tea is very rich in carbohydrates, protein, and calcium. Some of its spices are orange zest (which is rich in vitamin C), anise, cinnamon and milk to list a few ingredients which all have beneficial effects on the body.

Drinking Thai tea plain is healthier than taking it with milk or sugar because it could aid in reducing the waistline for persons desirous of losing weight. Thai tea can, therefore, serve as an effective weight loss drink.

3. Could Be Taken As Dessert

Thai tea can be consumed as a dessert rather than as a beverage. Desserts are said to enhance one’s general well being physically and serve in decreasing cravings as some dietitians suggest. This could help influence a person’s mood positively. Thai tea as a dessert could be enhanced by adding black leaves as well as a combination of anise or cinnamon with vanilla, sugar and sweetened or half creamy milk. Such a rich combination would not only keep one healthy but energetic for a busy day.

Apart from the nutritional values mentioned above, another health benefit of Thai tea is the prevention of cancerous cells from developing in the body. Adopting the habit of drinking Thai tea which is rich in antioxidant and anticarcinogenic properties would help fight and reduce the risk of cancer.
(https://www.tandfonline.com/doi/full/10.1080/19476337.2014.909885)

5. Beneficial For The Heart

In addition to cancer prevention by Thai tea, its regular consumption could prevent a stroke or heart attack by helping the arteries to expand and function well. For Thai tea to be more effective, you can drink it hot bearing in mind that warm water, for example, is of a greater health benefit to the body than cold water is. Taking Thai tea hot would, therefore, open the arteries and veins as well as improve blood circulation especially if consumed plainly than taking it cold with sugar and sweetened milk.

Thai tea can be used for detoxification and cleansing purposes within the body. The urinary tract could be infected by bacteria which could cause urination or the passing out of metabolic waste painful and difficult. Drinking Thai tea would help cleanse and detoxify your system considering its antioxidant properties.

To help improve your metabolism, drink Thai tea (without milk or sugar) early in the morning about 45 minutes before breakfast and at night before going to bed. Thai tea helps improve your metabolism, ease digestion and helps soothe breathing complications such as pneumonia or asthma. Due to the improved metabolic effect, body fat could be lost, thus, leading to weight loss.

If you always feel tired, fatigued or weak, this drink is a great day starter for energy. If you work long hours and barely have time in between to have a bite, then you could substitute with Thai tea. It is of great energy value, helping your body to remain active and alert while burning fat or having them converted into energy.

Another benefit of this dessert/beverage is the primary fact that it is delicious. Most often, consumers would not buy or consume something because of its numerous health benefits but just for the simple fact that it is delicious. Being delicious gives people such satisfaction and feeling that makes them want more and they sometimes are prepared to recommend that product because of the optimized utility they get using it. The same is true with Thai tea. It is simply delicious and worth drinking and recommending.

11. Rich In Vitamins And Minerals

Thai tea is of an immense benefit to the body in terms of minerals and vitamins. An example of two of such minerals and vitamins are calcium which fortifies the bones and teeth in strength and vitamin A which is good for eye health. Vitamin A enhances the cornea which helps in preventing eye infections, impaired vision or an eventual corneal ulcer.

Finally, the last but not the least of the multiple advantages of this tea; it is quite low in sodium. It contains 21 milligrams per serving. Therefore, it is difficult for Thai tea to aggravate one’s blood pressure if they have been diagnosed with hypertension. Furthermore, the flavonoids and minerals in this dark tea help inhibit certain microbial infections. If you want to reduce the likelihood of having diarrhea, skin infections, dental plagues and bad breath, for example, start drinking Thai tea. It would help you feel and be healthy in surprising ways.

POPULAR:  17 Benefits And Uses Of Chives 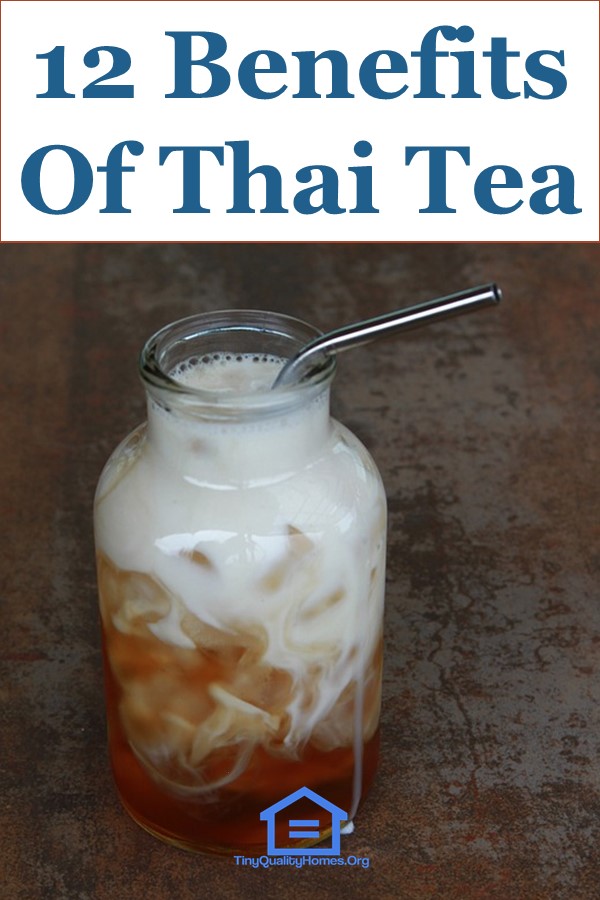